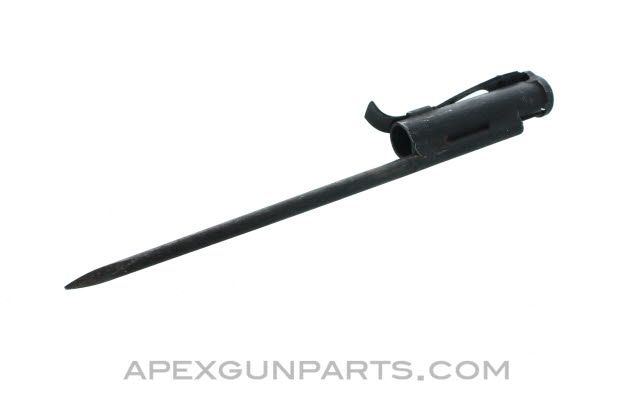 This Original bayonet for the Mark II Sten gun has to be the rarest & most sought after of British World War II bayonets!!
This bayonet is seldom seen in even the most advanced bayonet collections, as nearly all examples of this bayonet were said to have been scrapped after the Second World War.
As you can imagine we do not have many of these bayonets available.
They are in *Good to Very Good* condition under the thin layer of oily grime that has accumulated from years of storage.

Here is what we know about the manufacturing history of these bayonets.
The parts for the Mark 1 bayonet for use with the Sten Mk 2 SMG were manufactured by a group of component subcontractors.
The parts & components were then welded/assembled by two, possibly three firms.
The bayonet pictured appears to have been assembled by Grundy based on the presence of their wartime code of S41, stamped on the upper left side of the bayonet's body section.
Also visible are the markings of the B & J Sippel Co. Ltd ...a spring subcontractor and provider of additional manufacturing operations.
This B & J S Ltd. marking is found on both the top of the spring catch & left side of the bayonet body.
Other markings are the British War Department  "Broad Arrow" showing ownership, as well as a letter "V" on the side of the body (significance unknown).

When looking around on the web you will note a number of reproduction Sten bayonets are available.
Those copies of Sten bayonets have been on the market for years as the original examples were not available until now.
The copies are fairly faithful to the originals, but when set side by side with an ORIGINAL example, the differences are easy to see.
I have one of our ORIGINAL STEN bayonets pictured.
Points to pay attention to are... the raised nib of the spring catch, as well as the shape & radius of the vertical extension of this latching spring.
The copies of the bayonet for the STEN MK II are almost handmade and the differences from the original stand out.
When observing the tip of the spike, the ORIGINAL is well shaped, but the copies are not so well done & are not uniform.
Finally, please note the markings stamped on the bayonet body and the number stamped into the spike itself just forward of the body section, these marks are not present on the copies.

This is your opportunity to own one of THE most unusual finds we have had pass thru our doors at APEX Gun Parts!

More Information
Reviews 1
Write Your Own Review
Only registered users can write reviews. Please Sign in or create an account
Related Products
Check items to add to the cart or
We found other products you might like!